The Continuing Storm: Global Threats in the Wake of a Worldwide Pandemic

All insights
Twitter Linkedin Mail
Oct 22 2020
The Continuing Storm: Global Threats in the Wake of a Worldwide Pandemic

“The Continuing Storm: Global Threats in the Wake of a Worldwide Pandemic” a Kekst CNC and CMi Forum webinar, chaired by security experts Ambassador Wolfgang Ischinger, Chairman of the Munich Security Conference and former German Ambassador to the U.S. and the UK, and Tom Hurd, Director General of the UK´s Office for Security and Counter Terrorism, was a must-attend for all those interested in global dynamics. The discussion was informed by Kekst CNC research, which provided an analysis of global threats as viewed by the public in six countries. 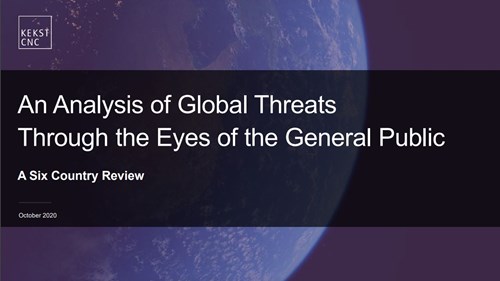 Following a short introduction by moderator and host Marie von Bismarck, the webinar addressed the issue of global threats in the wake of the pandemic. Hurd not only contributed insights into the UK´s challenges to security, commenting on the current situation: “For someone working in safety and security, [the pandemic] feels like being in a continued crisis management exercise,” he said, adding that the dangers have become ever more complex, challenging governments’ ability to respond.

Hurd highlighted core drivers underpinning the new threats, pointing in particular to the transnational element of threats forcing governments to view them more holistically as well as the fact that new technologies have lowered the bar of entry for adversaries.

To address these drivers, he noted, governments in his view have to focus on two areas. They need to invest in predictive capabilities and techniques and prioritize investments that can be used in science, technology and cyberspace underlining just how technology represents the new definition of power. He also underlined the importance of governments continuing to focus on protecting democratic institutions. Hurd concluded by stressing that maintaining public trust is critical to any government in terms of maintaining safety and security.

Ambassador Ischinger noted in his opening statement, “It is quite obvious that the more international our approaches are, the more united we are as individual nations, the less separate we are in trying to combat terrorism [and] international threats, the better will be the chances of meeting these challenges”. Ischinger pointed out that it is important that Europe not delude itself into thinking the US will protect the European Union and that the bond once thought to be everlasting will hold. The notion today that Western-style democratic parliamentary government is the only model for developing countries to follow, he remarked, is an unexamined belief that needs to be questioned.

Ischinger said that conflicts and warfare increasingly are no longer waged between states but now can take different forms. Nations have to adapt to the threat posed for example by cyberattacks and non-state criminal actors – and their ability to create damage faster than ever before. He appealed to the EU, urging it to unite on questions of security. “We will not be able to deal with the climate crisis, terrorism, and migration on our own. We need international solutions,” he said, leaving it clear the EU must speak with one voice. He concluded by stating that the only solution lies in greater credibility and capability within the EU.

Participant questions followed the discussion and enabled the panelists to expand on their key message: security today is not defined only by governments’ ability to respond, but by acting in concert. Given the power of interconnectivity, the common endeavor of governments, industries and communities will be defined by their collective efforts. By sharing data to deliver better outcomes and placing greater trust in one another, the world can achieve greater stability.

Jun 01 2021 News
Scott Melrose to Join Kekst CNC as Director in the Middle East
Jun 01 2021 Public affairs
Beyond Brexit: Redefining the Relationship Between the EU and the UK

Webinar: The Impact of COVID-19 on ESG Priorities