A week after the dust has settled on what could be the most pivotal United Nations Climate Change conference in history, the jury still seems to be out on the success of COP26.

An emotional Alok Sharma closed proceedings on a low note while Boris Johnson was upbeat as he marked the ‘death knell for coal’. Global media were cautious on calling it either way while business seemed confident they were in pole position.

But at a time when consumer behaviour is so critical, what was the verdict from the public? Research carried out by Kekst CNC has found that COP26 was a score draw with the public at best, with just 1% calling it a ‘big success’ and just under a third considering it a failure. 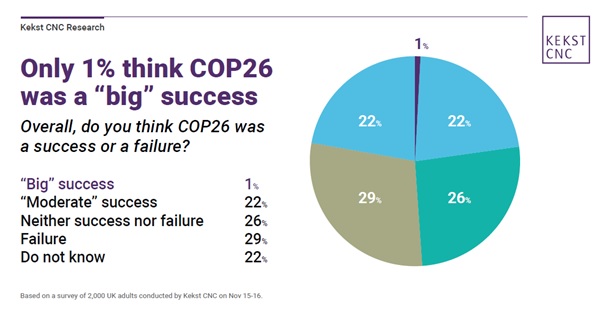 The verdict on the corporate world

When it comes to business, what the public really thinks is at complete odds with the narrative inside the corporate echo chamber. Only a staggering 17% agreed that businesses showed leadership during the summit, while just under half (42%) said there was no sign of real leadership from the private sector.

In an equally worrying finding, beyond the boundaries of COP, six in 10 British consumers said that businesses are not doing enough to tackle climate change, while only 14% said that they are.

The verdict on governments

Thanks to modelling from the IEA, we know that limiting global warming to below 2 degrees could be possible by the end of the century, if countries put their COP26 commitments into action. Pledges from all 196 countries to return to the negotiating table in a year with strengthened 2030 targets, might just allow the UK to claim it has ‘kept the 1.5 degree target alive.’

Could the extra time afforded global leaders mean we’ll look back on this month’s summit as a historical success? Maybe. While the sense inside government seems to be one of very cautious optimism, the public is less convinced. 45% said that countries didn’t show leadership at COP26 with only 24% saying they did. And when asked about the potential impact of the Glasgow Climate Pact, 40% said it wouldn’t make a difference, while one in three said it would.

In a slightly more positive finding for the host nations’ government, the UK topped the league table of countries who did the most to help with the aims of COP26, with 35% of Brits saying it did best. This was followed by the USA in second place with 5%, and Germany with 2%. And in what is an important indicator of the public’s apathy, a whopping 48% said none of the above.

The verdict on leaders

Perhaps unsurprisingly given his status as a national treasure, Sir David Attenborough had the best summit, the first choice of 25% of those surveyed when asked who came across best. In a more surprising outcome, Boris Johnson and Greta Thunberg share the silver medal, both on 8%. The summit’s president Alok Sharma came next with 6% of the vote, followed by Joe Biden on 2%. No other leader received more than 1% of votes. Again, apathy is a recurring theme – with 44% of respondents unable to identify a stand-out leader.

The results of the COP26 public opinion survey show that people doubt the leadership of governments and business alike. Perhaps the most important revelation for any organisation with a part to play in the climate transition, is the significant amount of apathy all round. In many instances almost half of those who responded failed to identify any kind of leadership or positive outcome at all. This suggests that despite the seemingly high levels of conversation throughout COP26, both the public and private sectors have a long way to go to motivate the British public and to build climate credibility.

As we turn to life after COP, public engagement will be critical to build and protect reputations, and campaigns that are rooted in research, data, transparency, and behaviour change should be central to any climate transition strategy.

Other polling from Kekst CNC includes the COVID-19 opinion tracker, now in its 9th edition.

It’s been an intense and fast-moving week in Glasgow. Expectations have quickly moved beyond words and pledges, and the battle against greenwashing has become a central theme. Will the event be considered a success or a noble failure?