Expected vaccine uptake jumps: seven in ten Brits say they would now get the jab

London, 11 December 2020 – The latest wave of the Kekst CNC Covid-19 Opinion Tracker, a survey in six countries, has found that expected UK vaccine uptake is on the increase.

The proportion of Brits who say they would definitely or likely get the jab is up by five percentage points on September, and now sits at 70%, the highest of all countries surveyed and considerably above the 45% for France where likely uptake has slipped.

But there are signs anti-vaccine social media campaigns are being noticed, as more than four in ten (44%) of Brits say they have seen anti-vaccine material in the last few weeks. Women and younger people are the least likely groups to get the jab.

The positive news around a vaccine has not yet meant an approval boost to Boris Johnson or the Government. Both had unchanged approval ratings of net -24, the lowest of all Western governments surveyed. Any dividend seems to be going to Public Health England, up from +21 in September to +31 now, and the pharmaceutical industry, up from +51 to +69.

Local business feels the strain, with four in ten Brits aware of a business closing due to restrictions Despite positive murmurs about a vaccine, the British public are becoming more concerned about the impact of the virus on local businesses. More than six in ten Brits (62%) are very concerned about businesses in their local area, up eight points on September and the highest level since the start of the pandemic. And, in a striking display of the level of economic damage, more than four in ten Brits (42%) say they are personally aware of a business that is closing due to coronavirus restrictions.

Pharma and food the businesses that have had the biggest reputation boost from the pandemic, but Brits expect the ‘winners’ to pay more tax

Asked which businesses they have the most positive view of from the pandemic, the public opt for food and essential retailers (who are now as popular as the NHS), the pharmaceutical industry, and online retailers. The main ‘losers’ have been financial services companies and banks, the travel industry, and the aviation sector.

But a firm having had a good pandemic does not translate to goodwill from the public when it comes to tax. With the debt burden rising, 56% of the British public want online retailers to pay more tax in the years ahead, 46% want financial services companies to pay more, and 44% technology companies. The public wants to see tax breaks for the leisure/hospitality sector (38% say they should pay less tax), and one in five want to see the travel industry and food retailers pay less tax.

Employees demand more flexible working after the pandemic, and are ready to pack their bags if not

Instead, workers want to work from home some or all of the time, and seven in ten say they are likely to seek a better work-life balance. In a sign of the challenges facing employers, workers may leave their employers if those changes do not come – three in ten British employees say they will look for another job if their employer demands a full-time return to the office after a vaccine is rolled out. 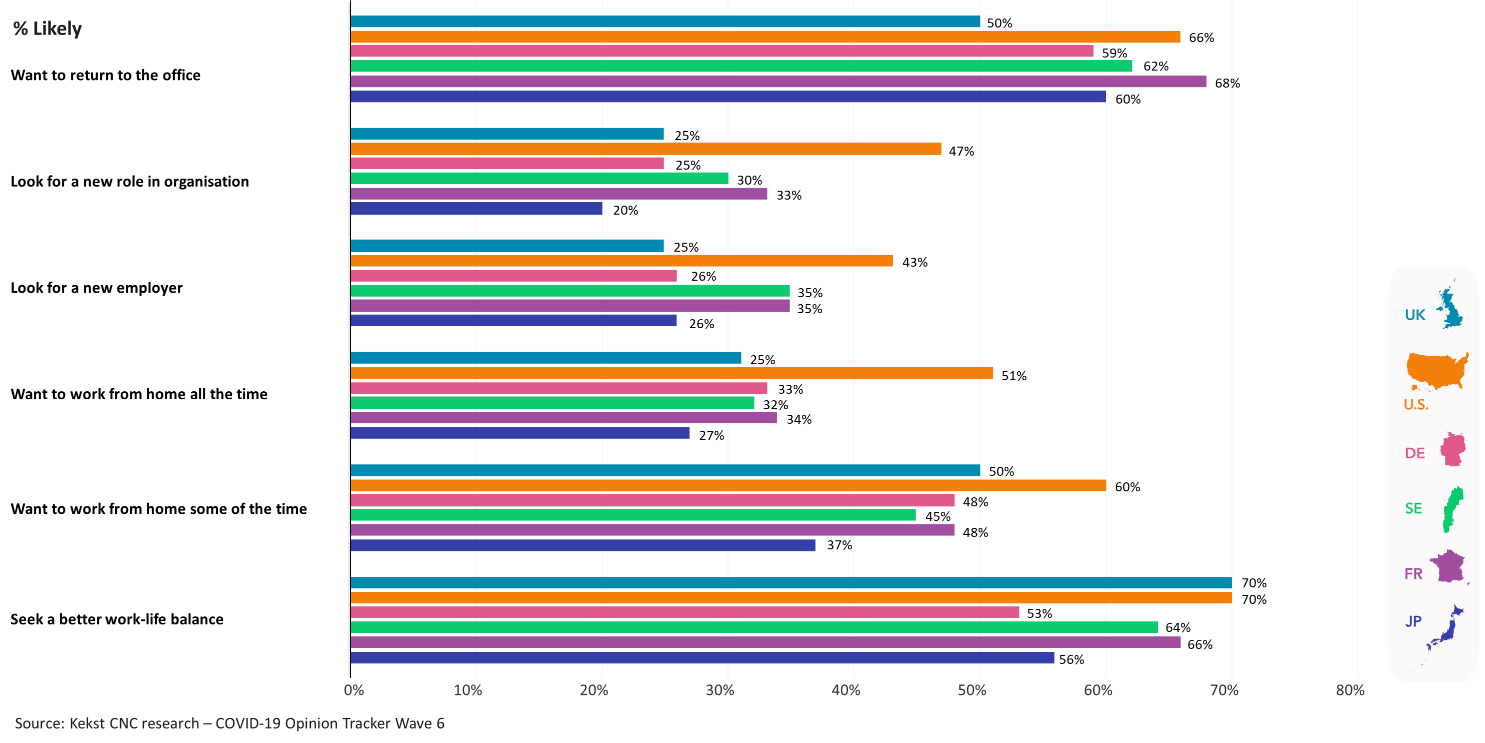 “In news that will reassure the Government and business planning ahead, Britain has one of the most enthusiastic populations in the world when it comes to getting a coronavirus vaccine. Seven in ten say they would definitely or would likely get the jab, and this is on the increase. However, the government should be on high alert when it comes to disinformation, as more than four in ten Brits have seen anti-vaccine content on social media in the last few weeks.

“Although early days in the rollout, there is little reprieve for Boris Johnson and the Government. Their approval ratings are unchanged on the autumn, and remains the least popular Western government in the survey – and global opinion ranks the UK as the second-worst country in the world for tackling the pandemic effectively.

“In a post-vaccine world, the public expects big changes from business. They want to see online and technology companies contributing most to paying off the debt, and employees want more flexible working and working from home. There is a stark warning for employers in this poll: if companies do not provide this new settlement, their workers could vote with their feet: three in ten say they will look to change jobs if their employer insists on a full-time return to the office.”