New York, 18 October 2021 – As the COVID vaccine rollout continues, over 20% of US citizens refuse to take a vaccine as confidence in the government’s pandemic response falls and divisions between vaccinated and unvaccinated Americans continue to grow. Furthermore, Americans believe the country will be worse off on a series of indicators in three years. These insights are based on the newest edition of the global COVID-19 Opinion Tracker surveying a nationally representative sample of 1,000 American adults, conducted by leading strategic communications firm Kekst CNC.

In regards to the findings, Piotr Pillardy, Deputy Head of Knowledge, Intelligence, Research, and Analysis at Kekst CNC said, “Our research indicates a clear division between those who are willing to get vaccinated and those who are not. Given how politicized the vaccine has become, it is ever more important for businesses to navigate the issue in an informed way. Since our last poll in April, the percentage of respondents willing to take a COVID-19 vaccine has nearly remained flat, only increasing by 3% to 79%. This leaves the US at least 5 percentage points behind the other markets surveyed.”

Pillardy continued, “While avoiding interactions with unvaccinated people is a priority for some Americans, there is still a general interest in avoiding any national lockdown measures. While 53% of Americans endorse a mandatory mask mandate indoors if hospitals are struggling, less than one in four of respondents support the closing of nightclubs (26%), non-essential shops (20%) and restaurants (24%) under any scenario.”

“Despite initial optimism for President Biden, the CDC, and all levels of government in May, the percentage of respondents indicating that the President, CDC, and all levels of government were responding to the coronavirus well declined, with President Biden falling to his lowest position yet (14% net “well”). That said, Americans expressed positive sentiments towards how CEOs of major companies have responded to the pandemic, addressed the welfare of their employees, and racial inequality,” Pillardy concluded.

Americans also indicated concern for the future, expecting the cost of living, taxes, national debt and crime to all rise substantially in the next three years. Respondents also reported that they believe the quality of their political leadership will decline and the standing of the United States on the world stage will not increase as much as they hope. 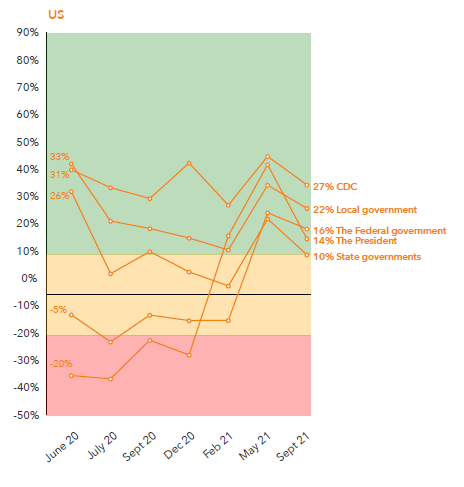 The approval of all major industries’ response to the pandemic declined since May, with the largest declines in the food/essential retailers and automotive/car industries. Online retailers remained the highest scored. The social media industry achieved a net positive approval rating for the second time since the tracking survey began.

Graph of winners and losers during the pandemic by industry 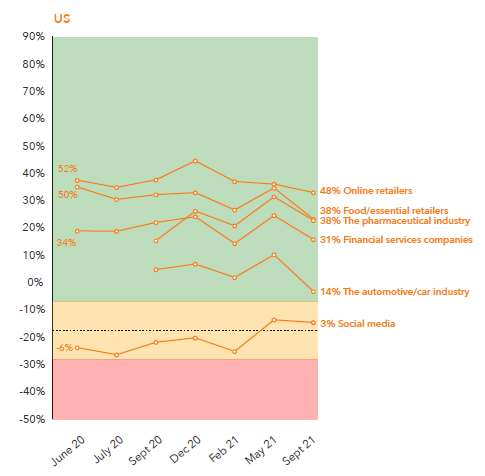 Comparing the US to the other countries surveyed:

Kekst CNC is a global strategic communications firm that specializes in protecting and enhancing reputations. From 14 locations around the globe, our team of 250 professionals provides expert communications counsel, informed by judgment, insights and data-led analysis. We apply our communications expertise across high-stakes corporate, financial, and political matters, helping businesses communicate effectively through periods of disruption, transformation and growth. Kekst CNC is part of the Publicis Groupe.

Further information is available at www.kekstcnc.com.

For the UK, France, Germany, and Sweden