London, 18 October 2021 - The 9th wave of the Kekst CNC tracker is revealed an uncertain British public that is increasingly focused on the UK’s uncertain economic future. Britain has seen a jump in the proportion of the public wanting to prioritise protecting the economy over limiting the spread of the coronavirus. 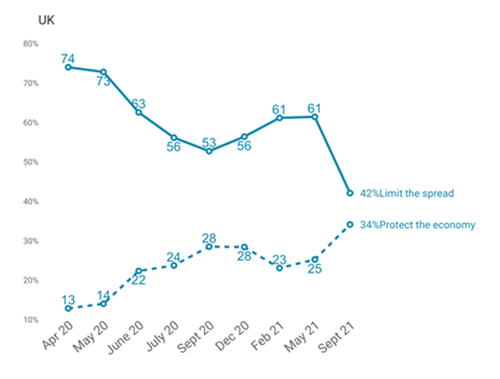 This shift comes despite high case numbers and poses a fresh challenge for business and government – the public no longer see limiting the spread as the only policy goal, and institutions will need to listen to and reflect this.

Optimism is also in short supply. More than 80 per cent of those polled in Britain think that the cost of living, prices and taxes will all rise in the next three years. And 58 per cent of the British public expect there to be another severe wave of COVID-19.

Confidence in the British Government, and the Prime Minister has also dropped sharply. Approval for Mr. Johnson stands at -18 per cent, the lowest of the leaders of the six markets polled by Kekst CNC.

While perceptions of the performance of business are also declining, key sectors such as online retail, food retail, and the pharma sector remain popular with the British public. And 45 per cent of Britons think CEOs are handling the coronavirus crisis well: to most of any of the markets polled. But attitudes to social media businesses continue to decline, with a net approval score of -16 per cent.

"As we move closer to the winter, the British public is in a very different place to earlier in the pandemic. The combination of vaccine protection, messages from government, and an increasing cost of living squeeze means that a once niche view – that the economy should be prioritised above limiting the spread of COVID – is now becoming more prominent.

Confidence in business is also declining – the heady days when supermarkets were as popular as the NHS are behind us – but support for key sectors remains robust. And our research shows that employees feel their CEOs have performed well during the pandemic. As we move to the next phase and into a world of potential economic hardship – not to mention environmental concerns – the public want to see leadership from business."

Other findings from this wave of the Kekst CNC tracker include:

Kekst CNC is a global strategic communications firm that specializes in protecting and enhancing reputations. From 14 locations around the globe, our team of 250 professionals provides expert communications counsel, informed by judgment, insights and data-led analysis. We apply our communications expertise across high-stakes corporate, financial, and political matters, helping businesses communicate effectively through periods of disruption, transformation and growth. Kekst CNC is part of the Publicis Groupe.

Further information is available at www.kekstcnc.com

The ninth iteration of Kekst CNC’s international tracking survey reveals a step-change in attitudes towards coronavirus, with more people saying governments should now prioritise protecting their economies, even at the expense of limiting the spread of the virus.

London, 18 October 2021 - The 9th wave of the Kekst CNC tracker is revealed an uncertain British public that is increasingly focused on the UK’s uncertain economic future. Britain has seen a jump in the proportion of the public wanting to prioritise protecting the economy over limiting the spread of the coronavirus.