What the FTSE100 CEOs do in a Crisis

The Data Story of Ukraine, Russia and Corporate Responses

For the leaders of the FTSE100 companies, the world indeed was watching.

Now, new analysis from Kekst CNC’s insights team reveals the data story of Ukraine, Russia, and corporate responses – and in doing so discloses a dramatic shift in executive communications.

Kekst CNC’s FTSE100 CEO Social Tracker analyzes all posts published by CEOs on their personal LinkedIn and Twitter accounts. In this second edition, we evaluated 302 posts across LinkedIn and Twitter from 1st January 2022 to 31st March 2022. We found that compared to the first edition of the report, the FTSE100 CEO social rankings have changed significantly, including new CEOs who are defining their own executive communications strategies.

The data reveals that the Ukraine crisis served as a social media reset for all CEOs. Executives went silent, with landmark company announcements being the only exceptions. The report reveals the following:

With the humanitarian crisis unfolding, ‘business-as-usual’ executive communications activity were set in sharp relief, and CEOs reduced their activity following the invasion. In a globalized world, Russian-linked business operations are a fact of life for global corporations, but for many of those companies’ business strategies changed. In some instances, a ‘pause’ later led to major announcements of divestment. 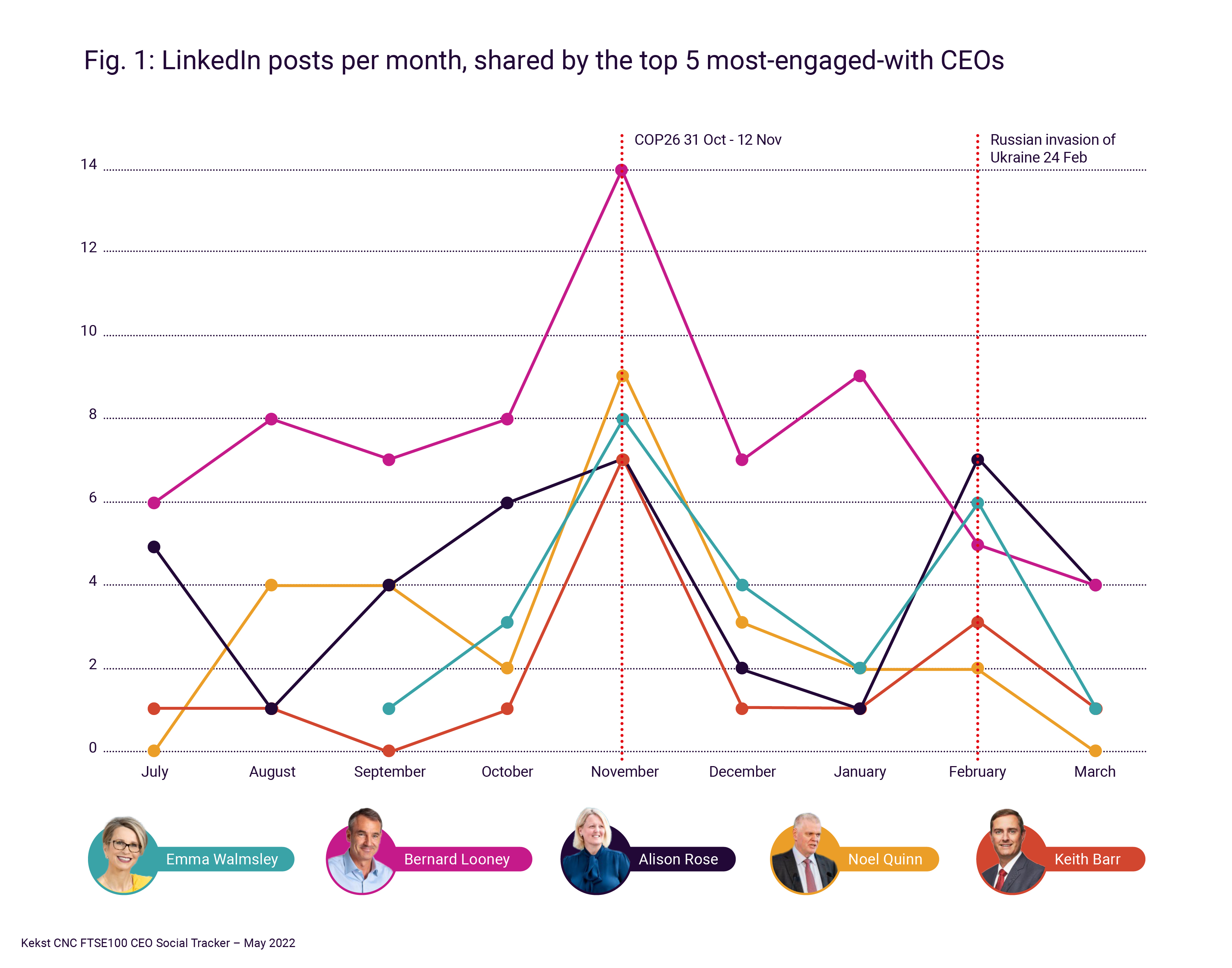 Of those CEOs who took a proactive and public leadership position during the crisis, 60% used first-person language in balancing their personal and business perspectives. Some 80% of the posts were emotive, using phrases like ‘shocked and saddened’ and ‘horrified’ to describe their reactions to the events. Unifying all posts was a clear directive on how the CEOs were responding to the crisis, varying from humanitarian support to ceasing operations in Russia.

Negative responses to CEO posts almost always criticized the company, rather than the CEO directly. Often adverse reactions tended to occur in the case of companies with operations in Russia that hadn’t been publicly addressed. Mostly, feedback to CEO posts was neutral: comparing negative comments received by CEOs before and after the Ukraine crisis shows little change. 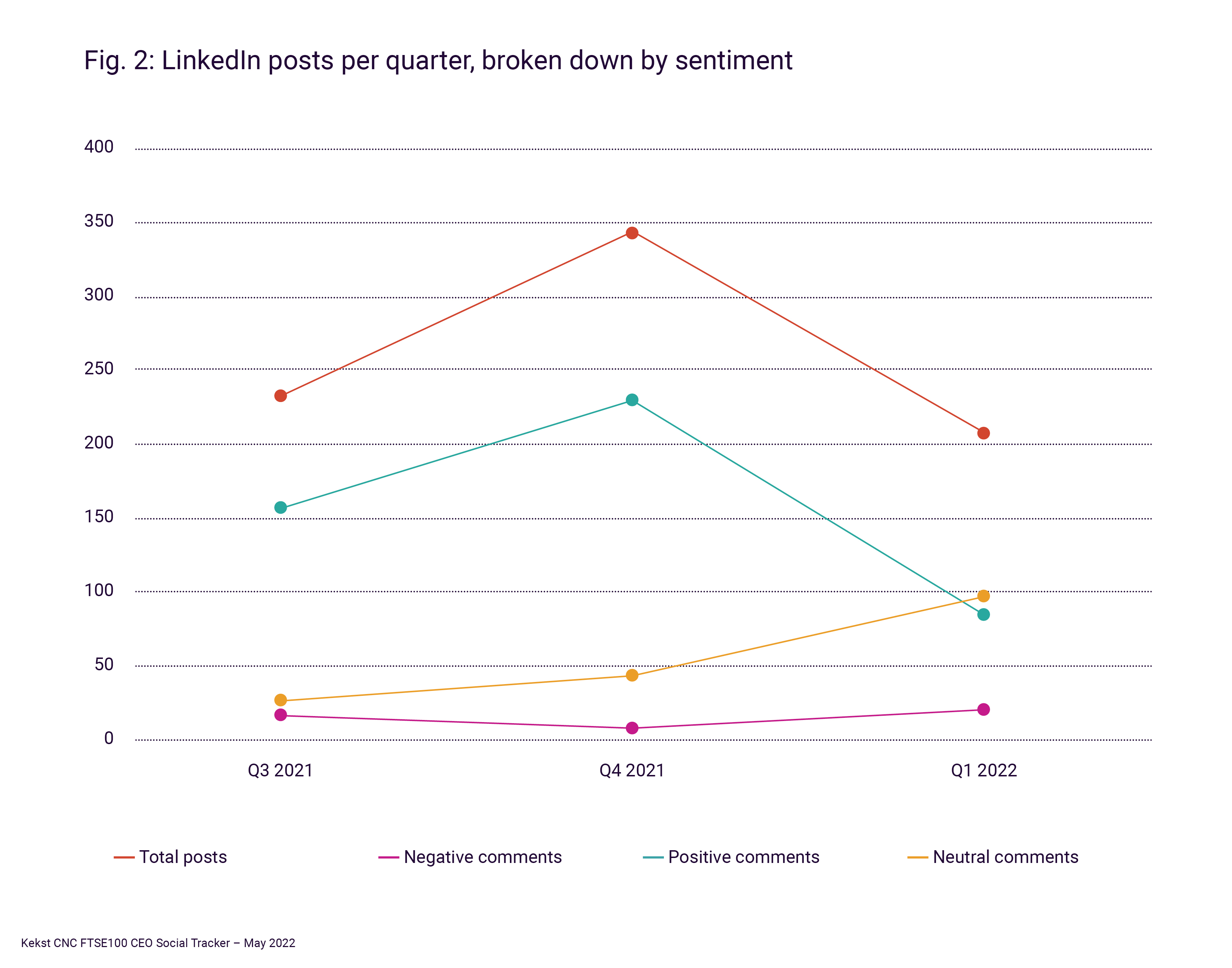 While our analysis focused narrowly on social media activity, the lessons as applied to managing reputational challenges are broader and more sweeping:

Be aware: Monitoring ongoing social media is a must, just as scrutinizing mainstream media monitoring is requisite. Especially in a time of crisis, it’s important to understand the audience breakdown on social media and the reactions that are coming through. These are what your investors, your employees, your partners, and your consumers are seeing and hearing. It is what must inform your business strategy and communications strategy.

Be transparent: Corporate websites, mainstream media, and a Google search will inform the public of your business operations. Manage the conversation by recognizing the situation and taking leadership. Transparently share the business response and plan of action, even if a decision hasn’t been fully decided.

Be personal: In a crisis that provoked an emotional response from every corner of society, leaders’ responses need to mirror those emotions. In communicating, CEOs must present their personal perspective and emotional reaction first, and the business’s response second.

Be conversational: Not every comment calls for a rejoinder, but if a remark raises a challenging point that can be addressed in a positive way, seize the day. Real leaders know to first listen than talk. On social media, an astute response may hold off a ranking comment from spreading disinformation.

Ignore algorithms: The FTSE100 CEO Social Tracker reveals the types of content that ranks highly, but in a crisis, words and actions matter most. Leaders should steer clear of hashtags: Text-based updates are best, and length allows them to present a measured approach. Most importantly, avoid having the crisis perceived as a promotional opportunity.

CEO communication is paramount for corporate reputation. However, almost half of FTSE100 CEOs are not actively present on social media. Our FTSE100 CEO Social Index aims to analyze how CEOs are currently using social media, with a focus on identifying what works and what learnings communication managers can leverage from what others are doing.

How to Lose Your Cool, Persuade a Sceptic and Avoid a Hollywood Fail

In our 11th Global Thinking podcast episode, guests Simon Pfeiffer and Randolf Carr, Policy Advisors at the Munich Security Conference and Kekst CNC’s James Johnson discuss the findings of a recent European survey conducted by Kekst CNC on behalf of the Munich Security Conference on digital (dis)trust. The research finds that Europeans are deeply concerned about their security online and worry that their countries are too dependent on foreign suppliers of digital technologies. Tune into this episode to learn more about the research findings and implications for businesses, governments and regulators.