International opinion survey, conducted by Kekst CNC, shows Americans by far the most concerned about the personal financial impact of COVID-19 — and least reassured by recent government response. Data shows both Democrats and Republicans back government bailouts for businesses

New York, NY, April 14, 2020 -- More than half of American workers are “very concerned” about their own jobs, and over one third (36%) worry that their companies will collapse due to COVID-19-related financial challenges, according to the findings of the first Kekst CNC COVID-19 international tracking survey. The data shows that Americans are split, however, on whether their confidence has increased in the federal government’s ability to handle the crisis. 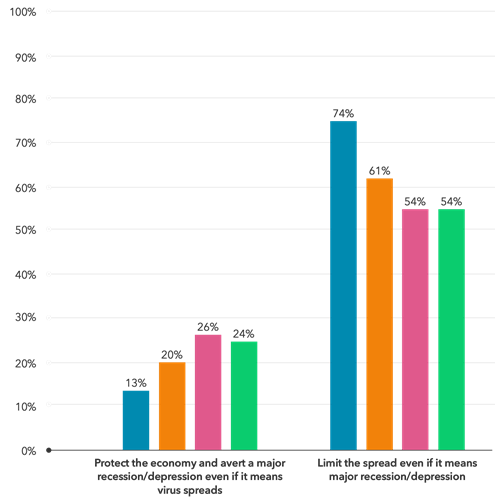 Americans also expect businesses to step up—and plan to reward them for doing so. Specifically, a majority (62%) said they will be far more likely to financially support businesses that performed well during the outbreak. This trend is by no means unique to Millennials: 68% of 55-64-year olds and those over the age of 65 also agreed.

The survey also found that significant percentages of both Republicans (45%) and Democrats (48%) support government bailouts for businesses facing trouble because of the outbreak.

The research, carried out among a representative sample of 4,000 adults, including 1,000 in the U.S. between March 30th and April 3rd, alongside similar numbers in the U.K., Sweden, and Germany found that Americans currently predict the starkest long-term behavior changes. A net 14% of Americans predicted they would travel domestically less often after the crisis. By contrast, a net 12% of U.K. respondents predicted they would travel more.

The impact of COVID-19 is seen to be long-term and the public want our institutions and our companies to stand up and be counted. They support further government intervention in significant numbers, recognize the efforts that some companies and institutions are making, and will reward those who are supporting the national effort. These results have implications for businesses and their Boards, as well as policy makers, confirming public backing for prioritizing saving lives over protecting the economy, alongside an appetite for government intervention to support companies of all sizes. The data shows how important good corporate citizenship is today, and the benefits that can accrue in the future.

The U.S. in Context (as of the time the survey was conducted)