London, 15 June 2020 – As pressure ramps up on government to reboot the economy, the third Kekst CNC COVID-19 international tracking survey has shown that the British public are gradually becoming keener on prioritising the economy – the first time this has shifted since the start of the pandemic.

More people now say that the focus should be the economy (up from 14% to 22%), but the majority (63%) still believe the Government needs to prioritise limiting the spread of the virus even if this means that there will be major economic damage. When compared to other markets surveyed, the UK is still the country most supportive of prioritising saving lives over the economy.

Graph 1: Protect the economy VS Limit the spread, with %s shown for April, May and June 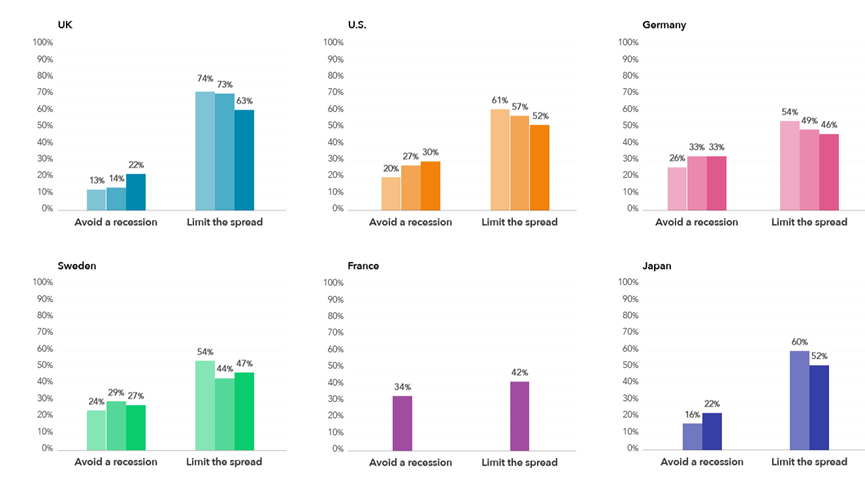 The UK is also the country most concerned about the impact of the virus on the economy as a whole – with 72% of Brits saying they are very concerned, compared to just 45% in Sweden and 54% in Germany.

But the path is not straightforward for the government, with 68% of people saying that the Government has lifted the UK’s lockdown too quickly. And, despite thinking the impact on the economy will be grave, Brits are the least likely of all countries surveyed to expect to lose their job or to think their company will collapse.

Commenting on the results of the third wave of research, James Johnson, Senior Adviser at Kekst CNC said:

“As the Government faces pressure to loosen lockdown measures, the public have shifted more towards wanting to prioritise the economy for the first time since the pandemic began. And, of all nations surveyed, we are the most concerned about the virus’ impact on our economy. “But the Government will also be punished if it goes too far. Brits remain focused on protecting lives overall, strongly expect a second wave, and think lockdown measures have been lifted too quickly. With trust in the Prime Minister already underwater, and the UK seen globally as having done a worse job than China or Russia, the Government has lost the benefit of the doubt they had from voters at the start of the pandemic. “We may be heading towards a perfect storm for public trust: both a high death toll and a severely damaged economy.”

The research, carried out among a representative sample of 6,000 adults, including 1,000 in the UK, between 1 and 5 June also found that the UK public is far more likely to expect a second wave of COVID-19 than in any of the countries surveyed.  Almost three-quarters (72%) are expecting a second wave in the next year or so, well above the 54% average for the five other countries.

The Government is also feeling the pressure: more people think Boris Johnson is doing badly than well, with his rating in firmly negative territory (net -7%). The UK is seen by the rest of the world as having handled the pandemic badly – below China, Russia, Italy and Spain. Only the United States fares worse. And while other nations say that their own country’s handling of the pandemic has been better than it is viewed internationally, the UK is the most critical of all of the markets surveyed on the performance of its own country (net 26% badly).

Criticism of Government and PM’s performance.  Focus wanted on COVID-19, not Brexit

While the NHS (88% net positive) and retailers (85% net positive) continue to receive accolades for their performance through the crisis, the Government and the Prime Minister Boris Johnson are both criticised with a 7% net negative rating for each.  Boris Johnson has a negative rating across a range of audiences including his traditional supporter base with the over-45s (1% net negative) and those in the middle- or higher-income brackets.

The public have short shrift for the Government focusing on Brexit in the coming months.  Two-thirds (68%) believe that the priority for the UK Government should be coronavirus and not Brexit. This view is held by a majority across all ages and political parties.

Serious concerns about the economy persisting, though few see it impacting their job security

The UK public remain the most concerned of all of the countries surveyed about the seriousness of the virus’ impact on the economy.  Some 72% say they are currently very concerned.  This is similar to last month’s number (74%), a trend standing in stark contrast to the significant falls in the same measure seen in all other countries (77% to 62% in the United States, 70% to 54% in Germany as examples).

Despite this, British workers are the least likely of all nations surveyed to expect to lose their job (only 9%), and least worried that their company will close (18%).

Continued support for business assistance, but not for CEO profile raising

Against this backdrop, the UK again scores highest globally in terms of providing support for business, with 63% agreeing the Government is giving business the support it needs during the crisis (65% last month).  Some 42% (compared to 40% last month) say that this is getting through to the businesses that need it, a higher proportion than for any country other than France. Almost two-thirds (64%) believe that UK business in stepping up during the crisis, up from 60% last month.

Public concern about the potency of the virus.  Very high interest in antibody test

Asked how serious a disease they believed COVID-19 to be, the British public on average scored it as 8.1, with 1 being a very mild disease and 10 being a very dangerous disease. This is the highest of any country surveyed.  Furthermore, 35% classify the virus as a 10, the most dangerous of diseases.  This finding is significantly higher than in any other market surveyed.

Individuals are very keen to find out whether they have had the virus.  55% say that they have heard of an antibody test, and overall 77% say they would want to take it if the results were proven to be accurate. This is 20% higher than the average for the other markets surveyed.

Only 8% of the UK public believe business should go back to working the same as before the crisis.  Given a choice of which of the E(nvironmental), S(ocial) or G(overnance) areas should be in focus, 42% identify social as a priority with a focus on health and safety, mental health support and ensuring that all in a supply chain live up to the same values.  23% identified environmental areas, in particular in terms of day-to-day practices and waste management.

One global political leader has had a good crisis

Alongside Boris Johnson, many other political leaders are subject to criticism from their own citizens over their crisis response. The Japanese Prime Minister scores a net 33% performing badly in Japan, and The United States President net 20% performing badly in the United States.  There is also strong domestic criticism of the French president (net 16% performing badly). These ratings are in complete contrast to that of the German Chancellor who scores 48% net well on the same metrics – and in every demographic group and region in Germany.

Germany overall has seen the most significant falls in concerns and is the only country worldwide where office workers say there are no barriers for them to now return to work.

Jul 10 2020 Data, Research and Insights
In Act Two of COVID-19, Understanding Businesses’ Reputation is More Important Than Ever
Jul 10 2020 Sustainability, ESG and Purpose
Webinar: The Impact of COVID-19 on ESG Priorities