With Government Poised to Ease Some Lockdown Restrictions, British Public Say: Put Our Lives Above The Economy

All insights
Twitter Linkedin Mail
May 11 2020
With Government Poised to Ease Some Lockdown Restrictions, British Public Say: Put Our Lives Above The Economy

LONDON, 11 May 2020 – The second Kekst CNC COVID-19 international tracking survey has shown that while other countries like Sweden, Germany and the United States have become more enthusiastic about protecting the economy, 73% of Britons (down only 1%) say the government should still prioritise saving lives even if that means a major recession or depression.

Just 14% of the British public (up by only 1%) say the priority should be to protect the economy, half as many than in Germany, Sweden or the United States. This applies across all age groups, and political parties – with Conservative and Labour voters united that the Government should put saving lives first.

Graph: UK public say, above all other nations surveyed, put our lives above the economy 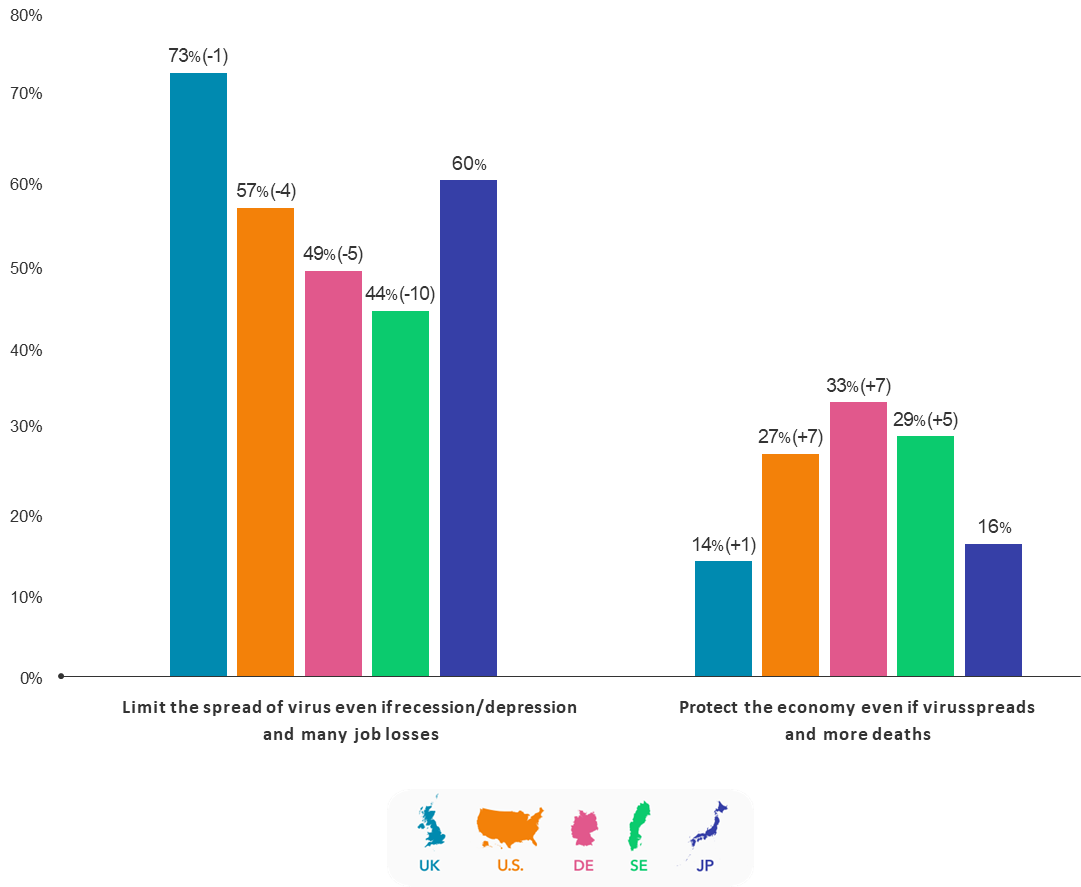 The research, carried out among a representative sample of 5,000 adults, including 1,000 in the UK, between 27 April and 1 May also found that the UK public is increasingly pessimistic about the long-term impact of coronavirus on the country – and more pessimistic than all other countries surveyed. Almost half of Britons (49%) now expect the impact on the economy to last longer than two years.

And the research also shows that the effects of the coronavirus crisis look set to stay with the British people for a long time, even in the event of a successful vaccine being found. People say they will travel abroad less, eat out at restaurants less, and avoid sporting events even after a vaccine is rolled out across the country.

“As the Government prepares to ease some lockdown restrictions, the British public could not be clearer: they want the Government to put their lives above the economy. “The Prime Minister will need to step carefully, as almost three-quarters of people – the largest proportion in any other country surveyed, and unchanged on a month ago – say they want the Government to limit the spread of the virus even if that means a recession or depression and the loss of many jobs. Not only do people think they will behave differently in the future, they expect to do so even when there is a vaccine against coronavirus.”

Britons want a more compassionate and caring nation after the crisis is over
More than half (55%) of the British public want to see the economy fundamentally changed when the coronavirus outbreak is over. Only one in four wants it to go back to what it was.

They believe the priorities for the government should be to pay and fund key workers more, especially in the NHS (18% choose this as the top priority) and to look after the most vulnerable in society (17%). Climate change policy is not at the top of the agenda, with only 6% naming this as their top priority once coronavirus is over.

The British public back government help for business
Almost two-thirds (65%) of the UK public believe that the Government is giving business the support that it needs during the coronavirus outbreak. This figure is significantly higher than in any of the markets surveyed. However, a significantly lower proportion (40%) believes that this support is actually getting through to the businesses that need it most. One in four British workers are still worried that the company they work for will collapse.

Slightly lower public faith that businesses are stepping up during the coronavirus outbreak
The majority of the public believes that business is stepping up during the pandemic although at 60% this is lower than the 68% recorded a month ago. When asked what they believed business should be doing, the three priorities are manufacturing health equipment, working together with other companies and for senior executives to take a cut in pay.

Even with a vaccine, people say they will behave very differently to before
Alongside the greater pessimism about the length of the impact of coronavirus, people are more likely to believe that their own behaviour in the future will change, irrespective of whether a vaccine is widely available.

People also expect to travel on public transport less in the future (net 31% less without a vaccine and net 16% less with one). Interestingly, this is not expected to lead to a corresponding increase in car use (net 3% less both without and with a vaccine).

The UK in context

UK Ready to Sacrifice Economy to Save Lives