New York, New York, May 12, 2020 –  International opinion survey, conducted by Kekst CNC, shows narrow gap between Americans who want fundamental change to the economy and those who want return to pre-crisis state. Data shows rising call to avert economic damage and a continuing decline of confidence in federal government response

Only slightly more Americans (47%) prefer fundamental change to the economy post-crisis versus a return to the system as it was (preferred by 40%), according to the May update of the international opinion survey tracker conducted by Kekst CNC, a leading global strategic communications firm.

Alongside focusing on a return to normalcy, Americans believe preparing for future pandemics – not necessarily increasing funding for key workers and looking after the most vulnerable in society – should be a key economic priority moving forward. Americans are also more likely than those in other nations to prioritize growing the economy.

Graph. Americans more likely than those in other countries to want to see the economy return to how it was 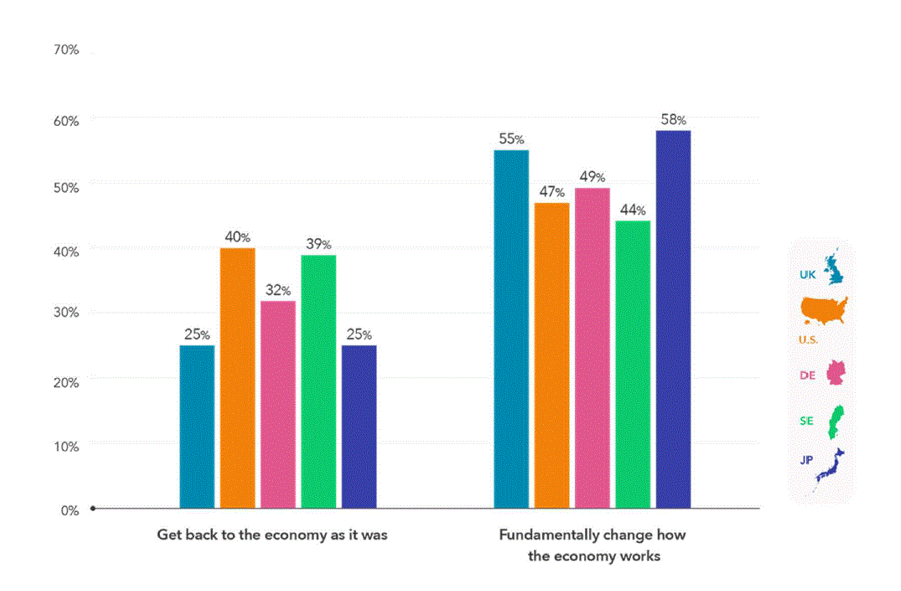 Importantly, the data also shows that while a majority of Americans (57%) continue to prioritize saving lives over protecting the economy, a growing number (27%, up from 20% last month) now believe the government should focus on averting an economic recession or depression, even if it means the disease will spread. High levels of concern persist about the impact of the virus to the economy.

The research, carried out among a representative sample of 5,000 adults, including 1,000 in the U.S. between April 27th and May 1st, alongside similar numbers in the U.K., Sweden, Germany, and Japan, also found  persistent belief that businesses are stepping up in response to the crisis (including 59% of Americans).

However, Americans are beginning to call for bolder steps from businesses: 1 out of 3 Americans prioritize executive pay cuts above other initiatives, even above manufacturing hospital equipment and providing cheaper goods/services for the most vulnerable (prioritized by 15% and 16% respectively).

“One of the most striking findings from this research is the split nature of Americans’ responses. America’s expanding and enduring cultural divide informs responses throughout—leaving leaders to grapple with tough questions about the type of economy and country we want coming out of this crisis. Businesses, especially, will need to consider these questions thoughtfully, with an eye toward diverse consumer preferences.”

The U.S. in International Context (as of the time the latest survey was conducted)

- Quotas and weights on gender, age, and region in each country

- Full results of the survey available at: https://www.kekstcnc.com/insights/covid-19-opinion-tracker-edition-2

Jun 04 2020
Episode 2: Reporting the News During the COVID-19 Pandemic
Jun 01 2020 Sustainability, ESG and Purpose
COVID-19 and ESG: Watch out for Japanese Corporations

With Government Poised to Ease Some Lockdown Restrictions, British Public Say: Put Our Lives Above The Economy