London, 1 March 2021 - The British public continues to show confidence in the performance of a number of key sectors of the UK economy, according to the latest wave of the Kekst CNC COVID-19 tracker, a survey of public attitudes in the United States, France, the United Kingdom, Sweden, Germany, and Japan.

“After a difficult 2020, the tide is turning for the UK. Three-quarters of people say the vaccine rollout is going at the right pace, the UK Government and Boris Johnson get a jump in approval ratings, and business is coming out of the pandemic with enhanced public confidence.  In contrast, people in Europe, the U.S. and Japan feel their vaccine rollouts are too slow, and are losing confidence in the pharmaceutical industry and the European Union.

“Business is working for the British public during the coronavirus crisis. Our poll has shown consistent public support for the performance of supermarkets and food retail during the pandemic. But now other sectors are catching up.

“The improved performance of the pharma sector reflects the perceived success of the vaccine rollout; leading pharma businesses are now household names. But other sectors such as online retail, and even financial services, also appear to have sustained and improving public support. While there will be challenges ahead, and people still expect business to pay more tax, the covenant between business and consumers may be at the start of the process of renewal.”

Increasing confidence in the performance of British business

Chart 1: For each of the following organisations, please indicate how well or badly it has done in responding to the coronavirus crisis. (Net Well-Badly) 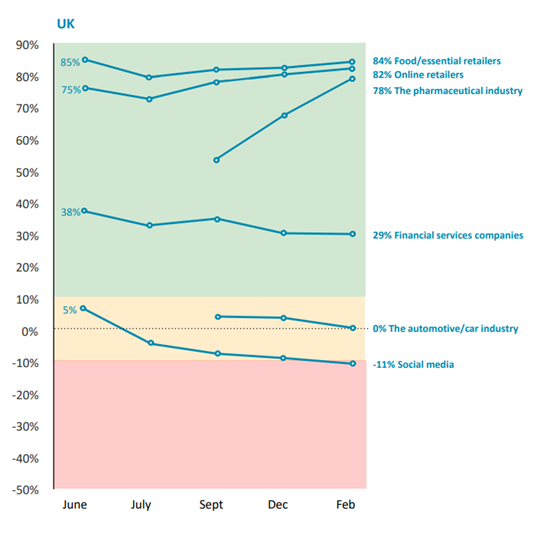 Vaccine Rollout: 3 in 4 Britons say the vaccine rollout is about right, the highest of all markets surveyed

Chart 2: Do you feel the speed of the rollout of coronavirus vaccines in your country is…

Attitudes to British Government recover, but still in net negative territory; collapse in confidence in the performance of European Governments

Chart 3: For each of the following organisations, please indicate how well or badly it has done in responding to the coronavirus crisis: The European Union (Net Well-Badly)

Difficult choices for the Chancellor on budget day

“Kekst CNC began its global COVID tracker project to ensure that the firm’s insights and advice through the crisis were based on clear evidence and a global viewpoint. For a decade, leading corporates have been told that they face a crisis of trust and offered communications strategies as a response. But this crisis has shown how trust is established through a track record of competence in its contemporary form – strategic agility, operational resilience, and close relationships with customers.

“Our polling suggests that those businesses with the clearest evidence of competent performance through a period of unique strain will be best placed to lead conversations with employees, consumers, customers, politicians and regulators.”

Further information is available at www.kekstcnc.com.

Jun 01 2021 News
Scott Melrose to Join Kekst CNC as Director in the Middle East
Jun 01 2021 Public affairs
Beyond Brexit: Redefining the Relationship Between the EU and the UK