London, 12 October 2020 – The fifth Kekst CNC COVID-19 international tracking survey shows that business continues to be seen to have operated effectively during the pandemic.

The majority of the UK public believes that food retailers, online retailers, and the pharmaceutical industry have performed well on a net basis. So positive are the British public about their supermarkets, that they are rated as highly as the NHS in how they have responded to the crisis – a net +80% and a net +78%. 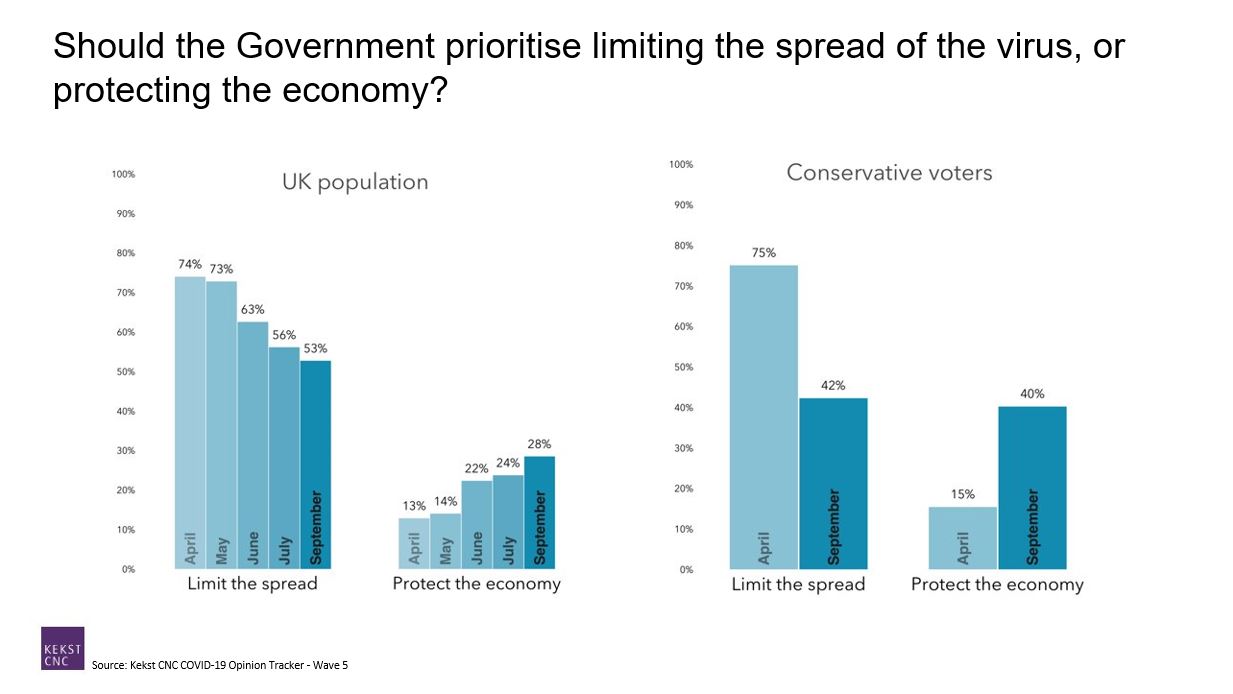 “As Britain teeters on the edge of more coronavirus restrictions, the public mood is very different from the start of the pandemic. Although the public still prioritise limiting the spread of the disease over protecting the economy, this gap has narrowed significantly – and what was once a niche view on putting the economy first is becoming more mainstream, especially amongst Conservative voters.

While this poll makes sorry reading for government, business can take heart from these findings, with public approval of how business has responded to the crisis continuing to be positive. But the economic hurdles of the coming winter mean that there will be more challenges to come, with employees now wanting their employer to focus on their pay, job security and health measures in the workplace.”

The survey showed that there is deep concern that the UK Government is unprepared to deal with another wave of COVID-19 with only 21% believing that the Government is well prepared, one of the lowest figures internationally. Three-quarters of the UK public (74%) believe the “the Government is making up its coronavirus policies as it goes along” (up from 67% in July).

This general concern is reinforced by declining ratings for the performance of the Government and the PM Boris Johnson for their handling of the pandemic, now at the lowest level seen since the tracking began in April.  30% believe that the Government has done well (down from 35% in July) and 53% believe it has done badly, up from 45% in July and a net score of minus 23%.  Boris Johnson has seen an even sharper decline in ratings falling from a net rating of  -12% to -24%.

For the first time, the proportion of the public believing that the Government is giving business the support it needs has dipped below 50% (to 49%, down from 57% in July), with only 32% saying that this is getting to the businesses that need it (down from 38%).  Alongside this the proportion of the public who believe that businesses generally are stepping up through the pandemic has fallen from 59% in July to 54%.  These results remain strong by international standards.

Employees want companies to do what they can to minimise redundancies

While the proportion of workers who expect to lose their job as a result of the pandemic has remained relatively stable at 11%, employees are clear about what they see as their employer’s responsibilities into the final quarter of 2020.  In the UK, more than in any other market, this priority is to avoid job cuts selected by 39% of employees.  The second highest priority was health and safety measures in the workplace (29%) followed by keeping pay at a reasonable level (26%).

Will it ever end?

The proportion of the public believing that the impact of the virus will be with us for over a year continues to grow and has increased by a statistically significant percentage in each of the five waves of research. Around 90% now expect the impact on businesses, the country, society and the economy to last for more than a year.  On all measures the results are higher than for any of the countries surveyed.

The national mood is summed up in the finding that almost three-quarters of adults in the UK (73%) say that “they have never been as worried about the future of the country as they are today”.  This proportion is significantly higher than in any of the markets surveyed and is broadly based across all demographics.

School reopening gets a B+

There is support for the Government’s decision to open schools at the beginning of September.  One in three (33%) views this as having been a mistake with 49% disagreeing.  42% believe the opening was handled well, and 34% saying badly.  On Brexit the public believes that leaving the EU without a deal would be a bad outcome for the UK by a two to one margin (46% bad/24% good).